Doc Wayne Youth Services was founded in 2002 by Susan Wayne in memory of her brother, Eli (Doc) Wayne. Eli was a pediatric physician as well as a tremendous supporter of using sport as a medium for positive youth development. He committed his time to students in the community by volunteering for and coaching youth sports. Susan is the former President of Justice Resource Institute (JRI), and she created Doc Wayne as a program of JRI in memory of her brother’s belief in the power of sport. In 2010, Doc Wayne became an independent 501(c)(3), and David Cohen became the first Chief Executive Officer in 2011. Today, our Chalk Talk® group therapy program is reaching hundreds of young people each week. 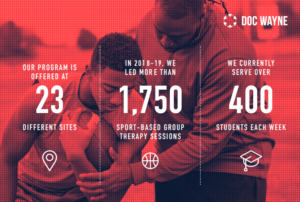